I decided to install a new oil sight glass as the existing one was weeping slightly. Initially, it was an aesthetic thing –  I didn’t like the sump area covered in black, greasy tar.

Then I read this nightmare story about an oil sight glass failing on the freeway. 4 liters of oil shot out in seconds resulting in a busted engine. The horror! The more I investigated, the more I discovered this wasn’t an isolated incident. Check out this thread.

The oil sight glass is what’s known as a “friction fit”. Basically, this means it’s kept in by itself without any clamps or screws or anything. It sort of melts into the engine block (at least, that’s my understanding of it). Over time, the rubber degrades and can start to leak oil. 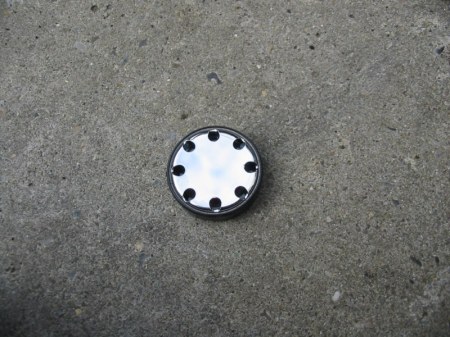 I did the first half of an oil change, i.e. drained the oil and removed the filter. I then turned my attention to the oil sight glass.

Here’s where it starts to get ugly…

I read you could stick a screwdriver through it and yank it out. So I did… or at least, that’s what I tried to do.

My guess is, the oil sight glass was the original, factory-installed part. It was practically welded (figuratively speaking) into the engine block recess. 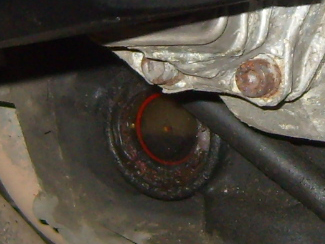 After smashing out the glass (plastic) I jammed a screwdriver through the center of it. I wiggled the screwdriver about but nothing happened – the sight glass was firmly stuck. I started trying to lever it out by going around the outside of it, but again it wouldn’t budge.

Finally, I thought I’d give the screwdriver a little help and tap it in underneath with a hammer. Oh yeah, baby… two of the finest precision engineering tools – NOT!

After a few minutes of tapping and mangling the old sight glass came out in pieces. It was utterly destroyed thanks to my “deft” touch. I’d show you pictures,  but it fell in pieces into the oil drain pan and I wasn’t about to start fishing it out. Sufficive to say, it put up a heck of a struggle but, my flat-head screwdriver and ball-pein hammer won the day. Or so I thought…

When I started cleaning off the area to install the new sight glass, I nearly puked when I saw a piece missing from the left-side of the sight glass recess on the engine block, exactly the size of my #10 flat-head screwdriver. Like I say, I nearly puked and felt a bit faint. I couldn’t believe what I’d done: 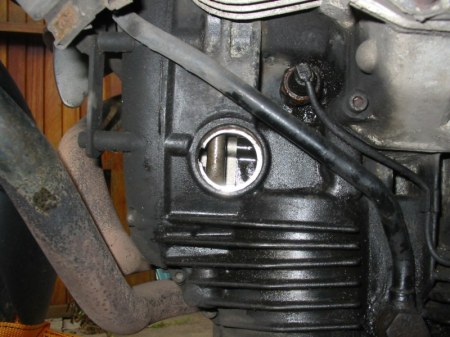 There was nothing I could do (other then rent a time machine). The damage was done so I set about installing the new sight glass. I wondered about leaks and loss of compression and that sort of thing, but I had to forge on.

The new sight glass was extremely difficult to get in. It was as if it was too small. I’d found no official instructions on how to install one or any tips  (the Clymer manual has zero instructions that I could find).

I managed to get the bottom of it in okay but couldn’t tap in the top with my trusty hammer as the oil cooling pipe was in the way. I tried taking this pipe off but it’s a major operation.

The upshot was I got it wedged in at a slight angle (bottom in, top out) as well and damaging the rubber ring (top right). Oh! They joy of installing  a new oil sight glass! 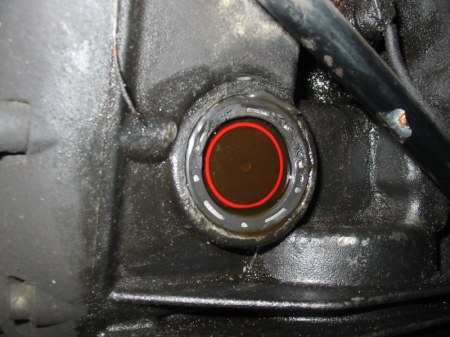 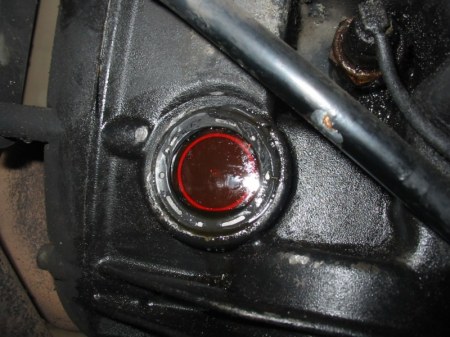 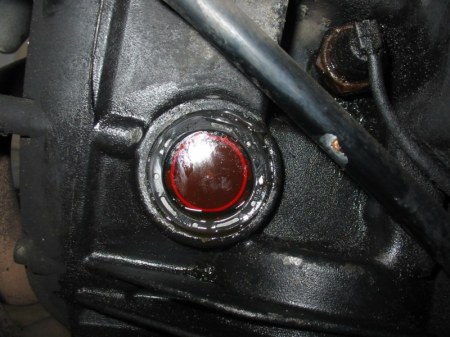 I’ve ordered another oil sight glass from Motobins and will update this post as soon as I get a chance to repeat the whole procedure (minus chipping the engine block bit, of course)

Find out what happened next: Oil level sight glass – part 2

This entry was posted on Thursday, October 29th, 2009 at 12:58 pm and is filed under Engine, Oil Sight Glass, Oil/fluid changes. You can follow any responses to this entry through the RSS 2.0 feed. You can leave a response, or trackback from your own site.